The movie is excellent. 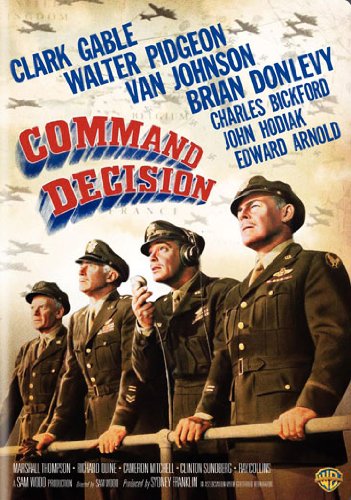 It focuses not on combat as such but on the United States Army Air Forces’ determination in 1943 to preserve its policy of strategic daylight precision bombing (the RAF believed in area bombing at night) despite growing doubts about that policy in Washington given the grave losses being suffered. Now the Journal of Military and Strategic Studies (University of Calgary, Centre for Military, Security and Strategic Studies) publishes an article that analyzes those severe difficulties facing daylight bombing as presented in the novel and play on which the movie is based. The article also suggests real senior USAAF officers on whom characters in the fiction are likely based (one maybe Curtis LeMay–more here and here). Well worth the read though the editing leaves something to be desired.

“12 O’Clock High” is also good about USAAF bombing in Europe when just starting in 1942–but unit-oriented as opposed to the big picture.

And a good book on one senior USAAF general:

Carl A. [Tooey] Spaatz and the Air War in Europe

US Air Force plans to nuke Leningrad from Goose Bay, Labrador, and Stephenville, Newfoundland, in summer 1950

Mark Collins, a prolific Ottawa blogger, is a Fellow at the Canadian Global Affairs Institute; he tweets @Mark3Ds

3 thoughts on “Mark Collins – Movie “Command Decision” and US Strategic Bombing vs Germany, 1943”