Yemen: And Another Arab Capital Falls to Iran

The Unraveling of the Muslim World 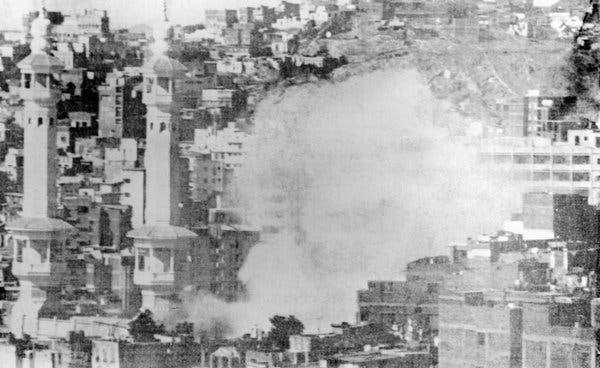 Saudi Arabia, Iran, and the Forty-Year Rivalry That Unraveled Culture, Religion, and Collective Memory in the Middle East

The holier-than-thou intolerance race that produced the Rushdie fatwa is one of many deadly episodes recounted by Kim Ghattas, a Lebanese-born journalist and scholar [tweets here], in her sweeping and authoritative history, “Black Wave: Saudi Arabia, Iran, and the Forty-Year Rivalry That Unraveled Culture, Religion, and Collective Memory in the Middle East.”..

Ghattas has set herself an ambitious task. She wants to explain much of the chaos that has convulsed the Middle East and Southeast Asia for the last four decades — the Iran-Iraq war, the upheavals in Afghanistan, the assassinations in Pakistan and the civil wars in Lebanon, Iraq, Syria and Yemen. She argues convincingly that these conflicts are all in some ways fallout from the fierce competition between two parallel “Islamic revolutions” in the annus horribilis of 1979.

Americans remember the revolution in Tehran, which brought to power the Ayatollah Khomeini’s Islamic Republic, turned back decades of social liberalization in Iranian society and triggered the capture of more than 50 hostages in the United States Embassy in Tehran. Ghattas, though, gives equal weight to a more obscure uprising that unfolded just a few months later across the Persian Gulf in Mecca, when a band of Saudi militants seized the Grand Mosque, one of Islam’s holiest sites.

Faced with a devastating challenge to its credibility as the divinely sanctioned custodian of Mecca’s holy places, the Saudi royal family was forced to rely on a team of French commandos to recapture the mosque. Dozens died in a blood bath [lots more here]. Then, to try to restore its authority while at the same time papering over the embarrassment of the French intervention, the royal family redoubled its historic reliance on the kingdom’s puritanical religious establishment as the source of its legitimacy…

The consequences are personal for Ghattas, who still lives at least part time in Beirut. “What happened to us?” she asks on behalf of the people of the Arab and Muslim worlds. “The question may not occur to those too young to remember a different world, or whose parents did not tell them of a youth spent reciting poetry in Peshawar, debating Marxism late into the night in the bars of Beirut or riding bicycles to picnic on the banks of the Tigris River in Baghdad.” She reminds readers of how almost unimaginably different the region once was, recalling the seaside garden of abstract sculptures by Henry Moore, Joan Miró and other modern artists that a daring mayor once assembled in the Saudi city of Jeddah.

…Instead of feuding over theology, Ghattas shows, Saudi Arabia and Iran transformed latent religious divisions into weapons wielded in the pursuit of political power, by cultivating and often arming sectarian militias across the region. “Before it was weaponized in the years following 1979, the Sunni-Shia schism lay mostly dormant,” Ghattas notes. Minorities like the Alawites of Syria or the Zaidi of Yemen had coexisted more or less peaceably throughout the area. And even after 1979 the hard-line rulers of Iran and Saudi Arabia have sometimes overlooked sectarian disagreements in the interest of political expedience, sometimes pursuing short-lived phases of rapprochement with each other…

Ghattas tells many of these stories through the eyes of myriad individual men and often women who spoke out in one way or another against the post-1979 conservative turn in the region — “all progressive thinkers who represent the vibrant, pluralistic world that persists beneath the black wave.”

The Iraqi television correspondent Atwar Bahjat, for example, raced back to her hometown, Samarra, in 2006 to report from the scene of a bombing. “Whether you are Sunni or Shia, Arab or Kurd,” she declared in her broadcast, “there is no difference between Iraqis, united in fear for this nation.” Gunmen came looking for her within 30 minutes. Her bullet-riddled body was found the next day.

Ghattas insists her progressive heroes represent “the silenced majority.” They are “the past and the future.” Yet most have ended up killed or in exile. The last of her heroes is the journalist Jamal Khashoggi, assassinated in Istanbul by Saudi thugs in 2018.

One supposes it all goes back the the Byzantines’ defeat of the Persians in 628 [see map at top of this post], followed almost immediately by the conquest of the Persian Empire by the newly Muslim Arabs.

Persian, or, a Reason Why the Iranians Take Themselves So Seriously

Together with China the longest running great culture and polity.

One thought on “Struggles Within Islam, or, Persians vs Arabs for Power Actually”