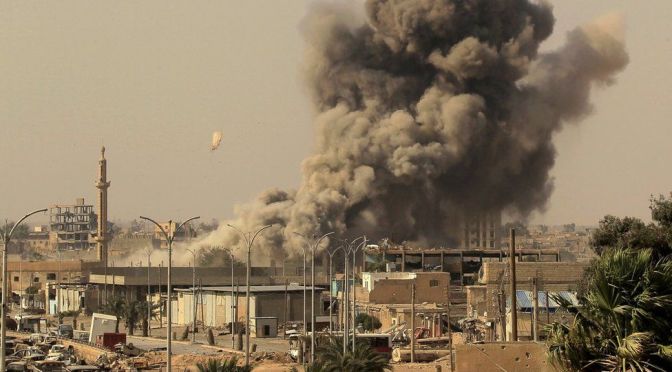 (Caption for photo at top of the post: “At the height of the battle for Raqqa [2017], the coalition conducted some 150 air strikes a day”.)

The introduction for the massive study:

The Air War Against The Islamic State

The Role of Airpower in Operation Inherent Resolve

Airpower played a pivotal role in the U.S.-led fight against the Islamic State in Iraq and Syria (ISIS) from 2014 to 2019 and contributed to the success of Operation Inherent Resolve. This report sheds light on the impact of the air operations in Operation Inherent Resolve and whether airpower could have been applied differently to achieve faster, more-sustainable outcomes. The authors incorporate interviews with U.S. and coalition personnel, primary-source documents, and U.S. and coalition strike and sortie data to document the operational history of the air war, assess the relationship between airpower effects, and analyze the strategic and operational impact of airpower in Operation Inherent Resolve [there are scattered references to the RCAF’s participation].

The authors find that, although airpower played an essential role in combating ISIS, airpower alone would not have been likely to defeat the militant organization. Instead, the combination of airpower and ground forces—led by Iraqi and Syrian partners—was needed to destroy the Islamic State as a territorial entity. The overarching strategy of Operation Inherent Resolve, which put ground-force partners in the lead, created several challenges and innovations in the application of airpower, which have implications for future air wars. To be prepared to meet future demands against nonstate and near-peer adversaries, the U.S. Air Force and the joint force should apply lessons learned from Operation Inherent Resolve.

*Airpower played a critical role in Operation Inherent Resolve, based on the “by, with, and through” strategy, which placed local partners as leaders of the fight to destroy the caliphate. In turn, partners’ capabilities and interests shaped how airpower was used.

*Although more-aggressive air operations might have slightly accelerated the defeat of ISIS, they are unlikely to have significantly altered the timeline.

*The deep fight in Operation Inherent Resolve affected ISIS’s finances, but it could not affect ISIS’s main center of gravity—territory—meaning that strategic attack did not play a decisive role in this operation.

*Critical enablers, such as remotely piloted aircraft and aerial refueling aircraft, were in high demand and provided vital capabilities but were at times overstretched.

*Essential wartime skills, such as deliberate-targeting and defensive counterair operations, were used for the first time in years in a real operation, requiring reinvigoration of these proficiencies.

*Battlespace management within the Operation Inherent Resolve coalition was a point of disagreement, particularly between the Combined Joint Task Force Commander and the Combined Air Forces Component Commander, and affected the development of the deep fight.

*The joint force should revise its targeting doctrine based on the experience in Operation Inherent Resolve, including potentially incorporating the strike cell construct into doctrine or determining whether to use the Joint Air Ground Integration Center to integrate airpower with ground partners in the absence of forward joint terminal attack controllers.

*The joint force should reinvigorate, reexamine, and revise the target-development process to make it more efficient.

*The joint force should modify the allocation process for high-demand assets in joint campaigns to reduce inefficiencies and increase agility.

*The joint force should reexamine battlespace management and revise doctrine or tactics, techniques, and procedures so that it can more dynamically manage both the close and the deep fights.

*The Air Force will need to limit civilian casualties and collateral damage, requiring it to allocate precision-guided munitions efficiently across theaters and identify how to safely use second- and third-choice munitions.

*The Air Force should continue to develop more targeteers and intelligence professionals to support a reinvigoration of the target-development process.

*Self-defense rules of engagement in air-to-air operations should be stressed to airmen in training and real-world flying events. Leaders should emphasize to airmen that they are empowered and expected to defend the airspace, while avoiding inadvertent escalation.

Debunking Myths about USAF Air Power and Gulf War I